A few weeks ago, I heard Mickey Muñoz was going to be at my local surf break for the filming of a documentary about East Coast Surfers. Even though it was the afternoon and I only surf at that time of day if it’s epic, I made a special effort to get my ass down there to talk to him because I hoped he’d agree to let me interview him as part of the project I’m so excited about. [What shall we call the project? Give me suggestions in the comments below will you? “the project I’m so excited about” will undo my already worn out keyboard.]

I was introduced to Mickey a month earlier by Wingnut Weaver, star of The Endless Summer II, and so, as I walked towards where Mickey and a couple of other people stood on the beach checking the surf, I banked on him remembering me. I don’t really think it mattered whether he remembered me or not – the words, “Mickey, we met about a month ago…” were barely out of my mouth and he was giving me a kiss on the cheek and putting his arm around me like we were best friends. Okay, I guess being a sun-kissed blond has its perks. Mickey proceeded to introduce me to the guy standing next to him – none other than Corky Carroll, the man credited with being the first professional surfer.

I listened as Mickey told one of his signature tales to a rapt audience. By the end of what turned out to be quite a yarn about the effect rain has on Baja journeys (turning them from 1 hour to a day or more), I was boiling hot. We were all standing in the hot September sun! I quickly mentioned that I hoped to interview him and then said, “It’s hot! I gotta get wet!” He agreed and said he’d meet me in the water.

Surfing with Mickey Muñoz turned out to be an uncommon pleasure. I was a little freaked out to discover there were a couple of guys with video cameras in the water with us and one on the beach, but Mickey was so relaxed that he quickly put me at ease. We talked and laughed between sets and I did my best to stay out of his way as he wielded his stand-up paddle board like a man half his age (he’s 75 years old!). 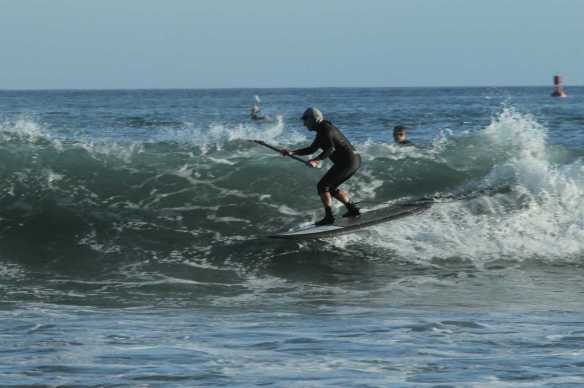 Near the end of our session together, we got onto the topic of localism – people who think they own their home break and who bring a shitty attitude into the water. He was surprised when I told him his is not the only break on the East Cape to suffer from this negative influence. He considered what I said, turned to me and said, smiling, “Those people have forgotten how lucky they are. Look at where we are! We’re in one of the most beautiful places on earth, sharing waves with just the two of us out. How many people can say that?” I will always remember the breadth of his smile as he spoke from the heart. Mickey Muñoz may be the most stoked surfer I’ve ever met. The title of his book No Bad Waves is a perfect reflection of his attitude.

The sun was approaching the horizon and the camera guys had long ago packed up and left, when Mickey turned to me and said, ”Been a pleasure surfing with you,” as he caught the next wave and surfed off. I sat out there and felt the trail of positive ions lingering in the air behind him flood over and into me. I felt blessed.

Several minutes passed and I looked towards the beach where Mickey remained, standing next to his road-weary Isuzu. I figured, like me, he was just soaking in the energy of the fading day, taking in the perfect little waves peeling off the point. As I sat squinting towards him, it occurred to me suddenly that maybe he was taking a leak! Thankfully he was backlit by the setting sun. I caught a few more waves before he left and, perhaps inspired by our talk and his stoke, I danced more than rode my board across their faces. He was gone the next time I looked over as I paddled back out to the take off spot.

The next day I emailed him to establish electronic communications. I expressed what a pleasure it had been to share the waves with him. His reply came quickly and to my delight began thusly, “I enjoyed our surf session also, you’re a good surfer.” Those last four words made me gush to overflowing with pride. I looked around and the only ones there to share the moment with were the dogs. No matter, I pointed at the screen and said, “Do you believe it? Mickey Muñoz, big wave rider and shaper extraordinaire said I’m a good surfer!” They lifted their heads lazily and looked at each other perplexed, as though they were saying “What is she going on about?” But they got into the spirit and thumped their tails against the floor in applause.

Below the text of his email was something even more special and I now knew what he’d been up to while he hung on the beach that evening. He’d been taking photographs of me riding the waves!! Thanks Mickey for making it look so good.