Recently, the first swell of the new surf season arrived. A storm that was spinning off the coast of New Zealand created the energy that created the disturbance that created the swell that arrived here on the south coast of the Baja California Peninsula.

As though a big rock was thrown into the biggest of ponds.

The storm’s winds hit the ripples to make them grow and the swell fanned out bigger and bigger. And we knew they were coming.

A phenomenon that has arisen over the past few years is internet-based wave tracking. It tells surfers where the waves will be born. Storms in one hemisphere are tracked and the swell they create measured and wave sizes, location and period predicted. It has changed the face of surfing. Removed the chance and challenge of being in the right place at the right time.

It has filled once unknown waves with crowds.

It used to be unusual for there to be more than five people out at one of the heavier local surf spots. And more often than not all five were your friends. At a more popular and well-known spot, crowds of 15 and up only happened when there was a surf school in town and that only happened but twice a year.

This last swell there were crowds everywhere. Twenty people out at the “secret” spot. And all very good surfers. People flying in from California just to catch the swell. More tents and campers on the beach than could be counted.

And the vibe changed. No more was it a group of friends in the waves together sharing the stoke. Now it was strangers competing for the best waves, jockeying for position. Giving and receiving the stink-eye. Dropping in.

The challenge of course is to maintain the stoke in the face of such changing and challenging circumstances. And for a relative new-comer to the sport, to maintain confidence while surrounded by very experienced and even professional surfers. Making it a mind game.

“Surf your surf” is the mantra. Focus and concentration are friends, insecurity and distraction enemies and potential killers (of the stoke at least).

There are risks that accumulate in bigger surf and bigger crowds. Getting caught inside in double overhead surf is scary at least, and at the risk of sounding melodramatic, fatal at worst. Exhausting for sure. But it happens. And it’s part of the challenge.

After getting caught inside twice on big sets, the temptation could be to go back to the beach. There is an eccentric surfer camped there that likes to yell “Go to the beach if you’re tired!!” There is wisdom in his annoying words.

It is a test of the metal. But with determination, the white water and currents are fought and the break resought. Breath regained. Center reestablished.

The lines on the horizon tell of a new set arriving. Energy traveling across time and space. Come half-way around the globe to rise up and kiss the shores of my home. 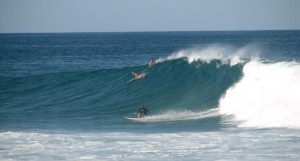