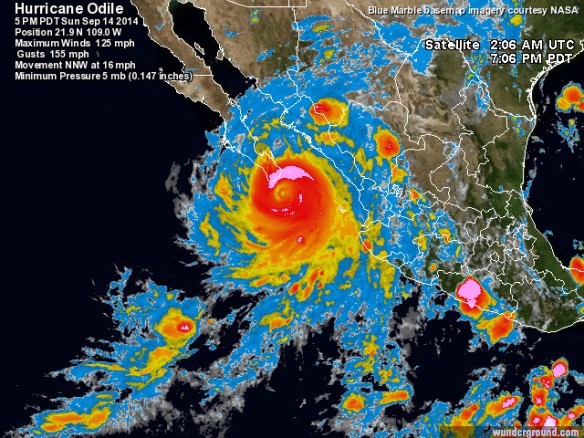 During the second week of September, 2014, a Category 3 hurricane by the name of Odile had the tip of the Baja Peninsula in her sights. On the 14th, at approximately 11:30PM, she moved ashore and wreaked havoc. She was one of the strongest storms ever to make landfall on the peninsula and easily the strongest storm in recorded history ever to make a direct hit on Los Cabos. (The only storm comparable was Hurricane John, which in 2006, hit a much less populous area here in the East Cape where, in comparison, only a small number of people were affected). In her wake, Odile left two cites, Cabo San Lucas and especially San Jose del Cabo and their quarter of a million citizens without power, communications or running water. Because I live off-the-grid, I had power, running water, and even an Internet connection. Between here and town though, power poles and major electrical towers were downed everywhere, making it difficult or impossible to drive the local roads. Most homes had serious damage, especially those on the beachfront, which were inundated by a storm surge created by massive waves unheard of in the region. In the panic after the storm the stores were quickly emptied of any and all of their contents. With no way to resupply – the airport and roads were impassable – people who hadn’t prepared for the storm, or who lost everything, were left completely destitute. To quote six year old Lucas Nobili, Odile was “quite a bitch.”

The good news is that ten days after the storm hit, the citizenry of Los Cabos have restored order, begun a massive cleanup effort, and with the help of the federal electrical commission, power is being reconnected little by little, allowing stores to reopen.

My account of going through the storm, alone, has been published on an online magazine called The Scuttlefish. Check it out by clicking on the link below and let me know what you think.

Into the Eye of Odile on The Scuttlefish

10 thoughts on “Into the Eye of Odile”

Tell me what you think. Seriously. I can take it. Cancel reply

This site uses Akismet to reduce spam. Learn how your comment data is processed.